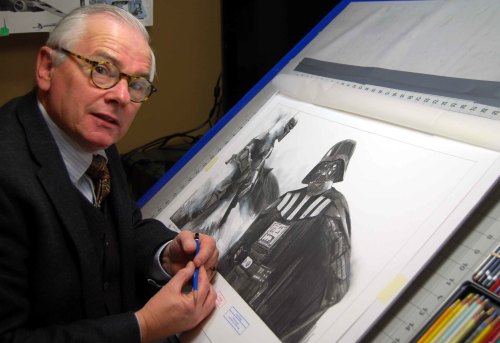 World renown artist, Robert Bailey, trained at Longton College of Art in England during the 60’s. He only just squeaked through with an ‘E for effort’ rating at the bottom of a class of 36 students. There followed various careers in photography, journalism and television. The latter was shooting television commercials on film and hosting a children’s television show. He then entered the field of aviation art, and became known worldwide in the genre for creating oil paintings of military action and having the veterans sign lithographs made from them. 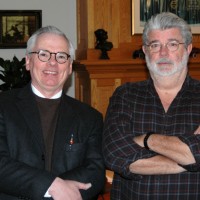 Robert and George at Skywalker Ranch

Movie producer George Lucas came across Robert’s aviation art website and asked him to work on Star Wars. After meeting with George at Skywalker Ranch, Robert’s career took on a new twist… Star Wars and other movies. Lucas was sufficiently impressed by Robert’s work to purchase originals for his private collection. Robert has gone on to create similar work for sale at comic conventions.

Robert’s favorite Star Wars characters are C3PO and Yoda, although he recreates the full spectrum of Star Wars characters in pencil. He is now retired from oil painting but finds that pencil is more fluid and scenes can be created far faster this way. The number of fans at Comicons who purchase Robert’s original movie creations has increased in leaps and bounds over the past 4+ years, and he loves to meet all of the fans who attend. 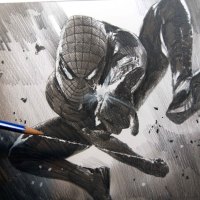 Besides being a Lucasfilm endorsed Star Wars Artist, Robert is licensed for Marvel characters, after having been approached by the Marvel licensor. Characters are mostly The Avengers and Spider Man. Stan Lee, creator of Spider Man, says that Robert is his favorite artist. Besides all these movies and characters, Robert is also creating panels for Breaking Bad, Frozen, Harry Potter, Princess Bride, Games of Thrones, Despicable Me, Tinker Bell and Indiana Jones. Celebrities who have collected Robert’s work include George Lucas, Linda Hamilton, Carrie Fisher, Mads Mikkelsen, Sigourney Weaver, Carrie Elwes, David Prowse, Ian McDiarmid and Anthony Daniels.